Foster Parents of the Year 2021 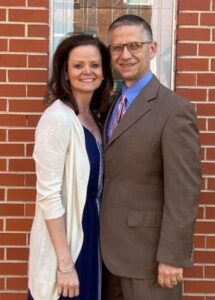 Her body swayed in a calming motion as she gently rocked the baby to sleep, cradling the newborn in her arms.

It was a month of feeding; a month of praying over; a month of fighting for a child who wasn’t her own, yet she still felt called to nurture.

It was a month of driving two hours every other day just to give that personal touch to this precious newborn. She was in the NICU fighting for her life, and Vincent and Stacia Spencer decided that newborn — who is also a twin — was not going to fight alone.

This was in 2019, right after Stacia had a dream her and her husband took in foster twins. She explained the dream to their case worker, and soon after that dream was their reality.

The Spencers have cared for nine children in all, including two who they adopted. The family has seen God move in many ways, including answering prayers in the least-expected ways.

“Our first two placements were exactly what my 17-year-old daughter prayed for,” says Vincent.

“As one of our [biological] mom’s rights were being terminated, she accepted Christ and was gloriously saved and delivered from drugs.”

Vincent explains that the biological mom has now been clean for more than three years.

Vincent and Stacia know the difficulties of foster parenting, but they also know the joys. It’s an accomplishment to get five kids between the ages of 23 months and 6 years old out of the house.

When they all go out to eat without having any melt downs or accidents, the Spencer family likes to say, “WE SURVIVED!”

This family has not just survived, it has thrived. It is with an attentive and loving personal touch that Vincent and Stacia Spencer were able to nurture the newborn and accept her and her twin sister into their home two months later.

The Spencers continue to touch each of the children’s lives who come into their home, letting them know they are cared for and loved.

Vote the Spencer family for Foster Parents of the Year!