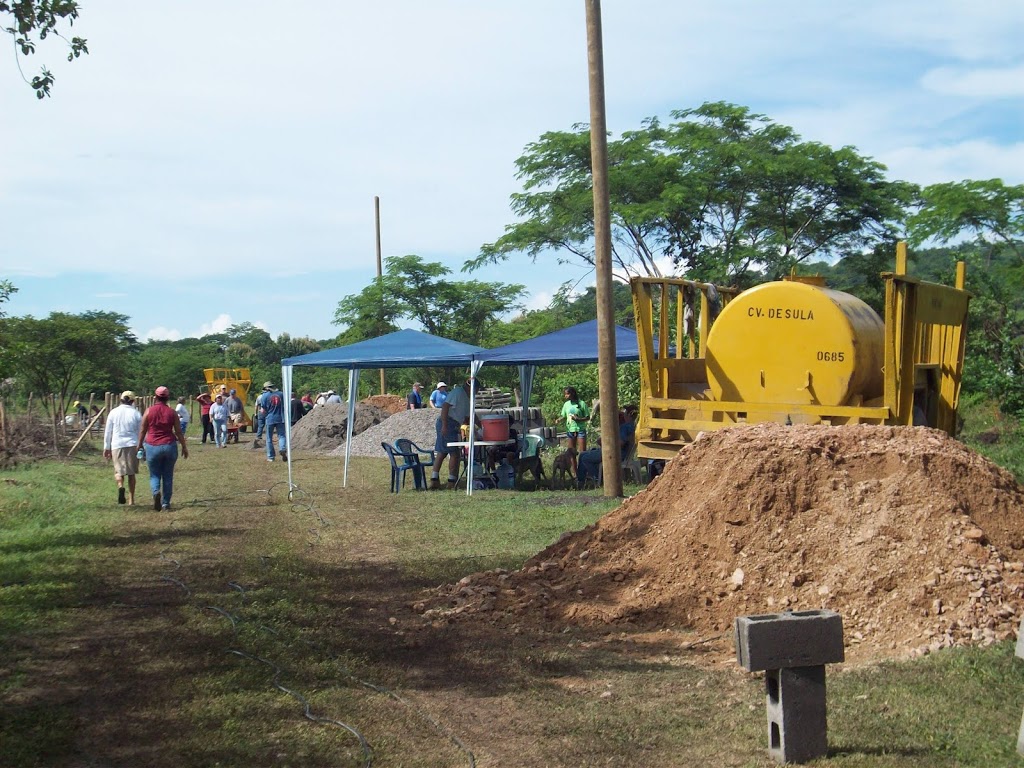 dev September 25, 2012
Day 1 – Sunday:  Letting Our Light Shine 5-Gallon Buckets at a Time:
We began work in the village of El Doradito.  We had to move yards and yards of a rock and clay mix fill into the foundations using shovels and 5-gallon buckets.  Two wheel-barrows were brought to the site later in the morning.  Work processes here are primitive by most standards.   We quickly grasped the block wall construction methods and worked together to set the blocks for 1 house and half of another.  The highlight of the day was the afternoon church service in the backyard of one of the village resident’s home.  Bob, Ron, David, Blackie, Robert, Rick and Hunter shared with the villagers, with Bob’s 13 year-old son Mauricimo translating.  At the end of the service the residents gathered around us and prayed over us in Spanish, with Mauricimo translating to English.  The children of the village played soccer in a pasture near the work site.
Day 2 – Monday:  Getting to Know Each Other:
We worked closely with the volunteers from the village again today.  We finished the two-thirds of the block walls on the third house today.  The men and women of the village contribute labor to the construction of each other’s homes.  We work with them in addition to paid construction workers, for which certain aspects of the construction are reserved.   During the course of our work, we have the opportunity to share and get to know the village residents and construction workers while we work alongside each other.  It is a blessing to see bonds being formed between the team and the residents despite the language barrier.   They are very patient with us as we grasp bits and pieces of their language, culture and construction methods.   Hard work is appreciated by all and seems to overcome most barriers.  We handed out the tape measures to the workers that were donated by John and Alice Guidy.  Blackie gave away his hammers and extra gloves today as did several other members of the team.   The hotel where we are staying in San Pedro Sula is very nice.  The evening meals and comfortable rooms at the hotel are very much appreciated after a hard day’s work in the heat of the Honduran climate.  We share WOWs and prayer requests after dinner each night.