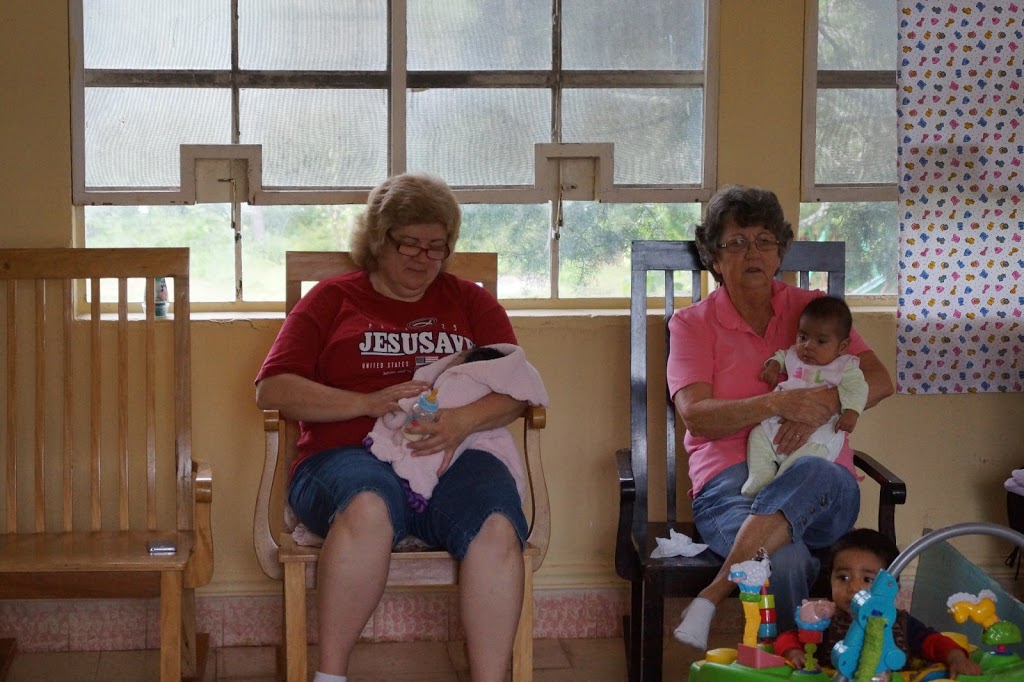 dev July 11, 2013
The Chicks and the Bunnies have had a great couple of days thanks to the Recreation, Art and Music teams.  The Chicks even got to finger paint!  Many of the Chicks are getting too big to pick up and carry.  Walking down the long hall to their bathroom takes forever!  We have to put one person at the ends of the hallway in order to get them where they need to be.  Chicks are still learning to go on the potty.  Most Chicks now wear underpants and we are ever vigilant about getting them to the bathroom several times a day, but we still have accidents.  Many accidents!  It seems like we spend our whole day in the bathroom!
We learned an important lesson.  Don’t put the pots down on the floor in advance, but  put them down as the children come back from lunch. Otherwise, they play in the pots and then brush their teeth while they are on the potty.
Dairin and Maria Ascension go on the toilets. Dairin loves to climb and stand up on the back of the seat.  One day she is going to fall in! Yesterday, the music team came to the bathroom for music and entertainment using the puppets to peak around the bathroom door. The children loved it and so did we!
Today, Emily and Courtney were  deemed Baño Princesses because they got the group in and out of the potty after nap in record time!
The Rec team took the children outside for a little bit of sidewalk art with chalk.  They loved being outdoors and able to run around.
Yesterday it was too cold to go outside so the Rec team brought recreation time to the Chicks.  They played with blocks and stacked cups. Ana Lucretia loves the cups and gathers them all up and carries them with her.
Alex, Walter, and Rosita love rocking in the rocking chairs.  If you want to sit down in them you have to scoop up a child to sit down.  Walter is doing well  from his eye surgery though his eyes are still very red sometimes.
Marta and Sucena continue to rule the Chicks though Lesvia is assertive when she wants to keep a toy.  All the Chicks are becoming less and less dependent on help and can now eat alone and, for the most part,
referee their own fights.
Hopefully it will not be long before Maria Ascension moves up from the chicks. She races around with her walker.  She is so happy to have it.  Last week, a physical therapist and nurse practitioner evaluated her suggested she continue to walk with her walker in order to strengthen her weak ankles.
Gaby must not have been feeling well. She cried for a long time before lunch.
The highlight of the day for them was watching the ducks and squirrels race on the tricycles around the courtyard.
More about the bunnies tomorrow!