How Prayers and Presence Saved a Life 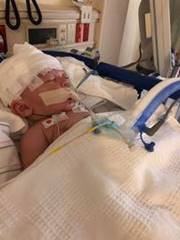 Brendan* was in the NICU for 61 days after his birth.

He was not expected to make it through the night. His body so badly bruised and swollen, was bandaged and covered with wires and splints. The medical team working on this 61-day-old child was doing everything it could but felt time was not on its side.

Danae found out about Brendan* through a Facebook post on one of our foster care community pages.  There was a simple request: pray for this child. He is not expected to live. The longtime foster mom started praying, and started seeking ways to offer comfort to this child, thought to be dying. Finally, with the legal red tape cleared, her prayers to be with Brendan, were answered. Yet Danae was not prepared for what awaited her.

“ When I walked into the NICU, I could not catch my breath. Just about every part of (Brendan’s) body was covered, and he was intubated,” she said.

Danae found a tiny part of Brendan’s hand that she could touch. With skin-to-skin contact made, she spent hours praying and singing and asking God to spare his life. She made the hour-and-a-half trip for several days, visiting Brendan in the NICU. It was not long before Brendan was well enough to move to another unit. In this new unit, Danae could hold him, sit with him, and even give him a bottle.  The child, once thought to be at death’s door, was beating the odds and making a miraculous recovery.

Danae is certain it was the prayers and being able to hold Brendan in this critical moment of his life that saved his life.

“God made the way for me to step in and be a part of this baby’s forever story,” she said.

Danae’s compassion for Brendan paved the way for him to join his two brothers in a One More Child foster home. Today, Brendan is happy and on his way to full health — now with his forever family.